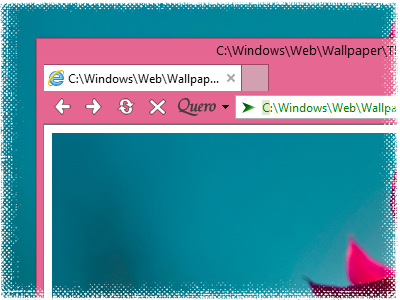 Just in time for the release of Windows 8, I am happy to present a new IE10-optimized Quero version. Quero Toolbar 7 now supports five generations of Internet Explorer, including IE10 (Desktop) and 64-bit IE :P

Important: Windows 8 is a hybrid OS combining two UX paradigms. Quero Toolbar is an add-on for the full-featured IE10 version on the Desktop and not the full-screen Metro-styled IE10 app, which does not support add-ons (except a built-in Flash version). The Quero AdBlock IE TPL however, works on both IE versions.

The new version also includes several bug fixes for IE9 and a new Auto Maximize feature, which allows you to automatically maximize every newly opened IE window, which was previously quite tedious, because IE remembers the size of the last closed IE window.

Additionally, Quero brings the page title back to the title bar, where it belongs to in my opinion. Note: The title bar is blank by default in IE9 and IE10.

Remains to wish you,